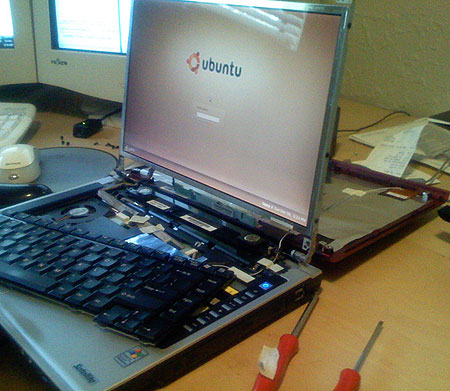 I got it for an awesome deal because the hard drive was broken, and the screen flickered a lot. I figured for the price it was worth the gamble, even if I had to replace the screen it was still a bargain price.

The hard drive was DOA, and was replaced immediately. I installed Ubuntu 7.04 Gusty as the main OS with windows as the second OS. Easy enough to do.

The screen flickered a bit, but if i messed with the lid enough, moving it back and forth, I could get a good picture. Over time the picture just got worse and worse. It was time to do something about it. I did a quick google search and found a Toshiba M55 LCD replacement guide.

I figured it had to be something with the connections on to the screen or board because when the screen was working, it was working good. The image was great, but it took a bit to get it there.

I followed the guide exactly. I powered it on when I had it torn apart and it worked! It seems that there was to much stress on the LCD cable connection, causing it to freak out when the lid was in specific positions.

I followed this guide to open up the keyboard. (steps 6 – 8 only). I was able to give the cable a bit more slack, and every thing started working like it should! I put it all together and it’s like I have a new laptop, and all it took was an hour of my time and the guts to do it. I should have cracked this thing open 6 months ago if i knew it was going to be this easy!

I hope this helps someone else with a similar problem.