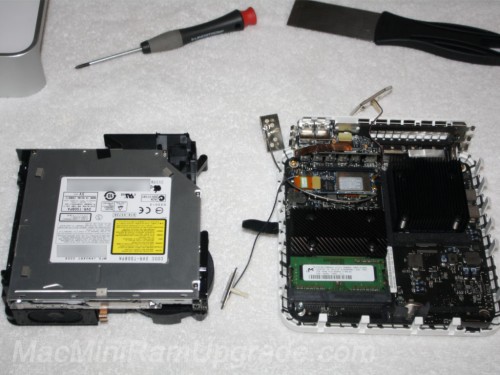 A few months ago I bought a Mac mini so I could start to develop iPhone applications. I must say that I am growing to be more of a Mac user then I thought i would be. I purposly bought a cheap Mac to get started with, but I’m starting to regret it. One of the downsides of buying a low end computer is the lack of RAM. RAM is the area of the computer where th.e work gets done. Think of RAM as a work bench. The larger the work bench you have, the more things you can be working on at the same time. It boils down to this, more ram, more speed due to less reading and writing to the hard drive. My Mac had 1 Gig of RAM, no where near enough RAM for a power user/programmer.

Coming from a PC and Linux world, I have build all of my own computers since 1996. I’m comfortable working with computer hardware and the Mac mini is just another computer, except its wrapped up in a tiny package. I did some research and realized that it wouldn’t be hard to upgrade the RAM in my Mac. I found that MacSales.com had some great prices on RAM so I went for it and got 4 gigs worth.

I documented the whole upgrade process, and launched a new website, MacMiniRamUpgrade.com. It’s a Do-It-Yourself site to help inspire and walk people through the upgrade process.

Adding the RAM to my Mac mini is one of the best upgrades I have ever done. So much bang for buck. You should do it also! http://macminiramupgrade.com