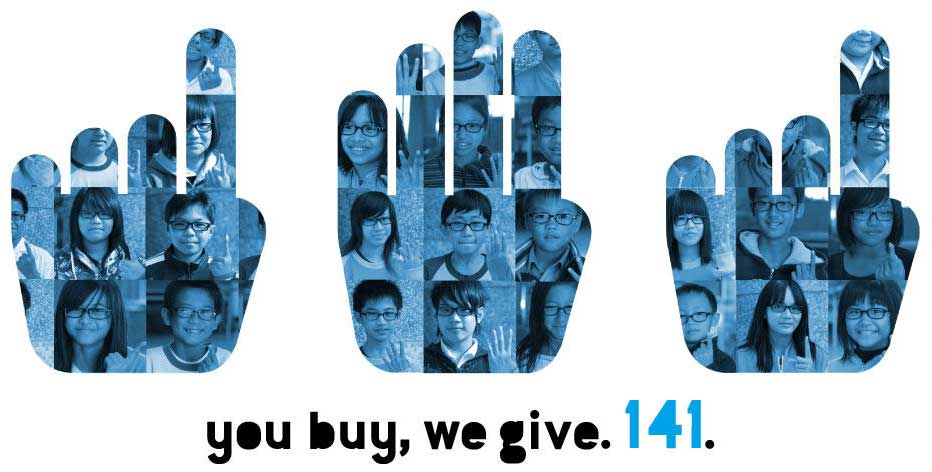 Over the past few years, Tom’s shoes have become well known, hip and trendy. Everyone knows that if you buy a pair of their shoes, they donate a pair of shoes to children in need. I love the philosophy, but HATE their shoes. Personally, I think they look ugly and clunky, but to each their own. Don’t worry, I’m not a hater, my wife has several pairs.

A few weeks ago, I saw a tweet from Timothy Ferriss about products with a purpose, and I followed the link. I don’t remember the article that I was linked to, but I managed to end up on 141Eyewear.com.

141 Eyewear is a company that helps children in need, who have eye problems. When you buy a pair of frames, they give a pair of glasses (including the eye exam and corrective lenses) to children in need, one for one, as their name implies. As someone who wears depends on eye glasses, and know how important is is to have the proper prescription, plus, who doesn’t like helping out kids in need? It’s a win win situation.

I had been thinking about getting a new pair of glasses for the last few months, but I’m very picky about my frames. I was instantly excited when I saw the awesome frames that 141 Eyewear produces. I saw the “Davis” frames, and knew that I had to have a pair.

I combed through the 141 website but couldn’t find a place to purchase a pair, so I used their contact form to ask them where I could buy a pair. I also hit them up on their twitter accout. Kyle Yamaguchi, one of the founds of 141 Eyewear instantly got back to me and told me that their eye wear was only being sold in Portland Oregon until summer time 2010. I was bummed to hear this, but it just so happened that a week earlier I had bought plane tickets to visit Portland with my wife.

When we landed in Portland, I sent a tweet telling people I was in Portland, and asked advise on what to check out. To my surprise, Kyle Yamaguchi was one of the first people to give me some suggestions. He also gave me the address of a store that carries 141 Eyewear.

We wandered around Portland for a few days, and eventually made it to the Pearl District, and “The Eye Studio“, a hip looking shop that carried lots of designer frames.

We were instantly greeted by the friendly staff at The Eye Studio, and shown the 141 Eyewear collection. I was in luck, they had one pair of “Davis” frames in stock. I tried them on and was instantly pleased with them.  The photos online didn’t do it justice, the finish on the “noir” version of the Davis frames is matte black and sleek. I had to have them.

While my wife, Amy, was trying on some frames, Shu-Chu Wu, also a founder of 141 Eyewear, came out of the back room and greeted us. She was super nice and showed us some photos of an eye clinic that 141 had put on. The kids looked amped in their new glasses.

After a bit of hangout, I bought the frames, and we were on our way. I didn’t get my prescription filled, so the frames are still empty. I figured I’d wait until I got home to Southern California.

I don’t publicly endorse many products, but I fully back 141 Eyewear and I hope you do to. They made great products that look great, and are helping kids at the same time. After having contact with both of the founders of the company, and seeing the work they have already done, I can tell that their motives are good and their intentions pure.

I’ll be posting a pic of myself wearing my 141 Eyewear once I get the lenses put into the frames next week.