I think I’ve done an OK job at this. I converted my office into my sons room. During that process I got rid of a fair amount of stuff. The remainder of it is in the garage and the current office (formerly the spare bedroom). I need to stop hording things that I don’t use. I’ll give me self a #meh on this.

This is a #Fail for me. I’ve actually managed to create more side work for myself and managed to lose an employee. I’ve got to get better at this if I’m going to live that 4-Hour Work week lifestyle

This is an #epicWin for me. I’ve been able to create more passive income this year, and automate more of my bills. It feels like I’m starting to get the hang of this this stuff.

Another #epicWin, I’ve was able to launch two shopify apps (SEO Meta Manager & Order Lookup App), get them featured by Shopify. As a result, they have become some of the top rated apps in the Shopify App Store. I credit Gary Vanerchuk’s book, “The Thank You Economy” for a large portion of the success I’m seeing. NewLeaf Labs also became certified Shopify professionals… #LikeABoss

I’m some where between a #win and a #meh on this one. I was able to launch more shirt designs, strike some promotion deals and gain a wider awareness of the brand. I know 2013 will be a better year. I’ve made some pretty large goals for the company, and I need to see them through.

YES! totally a #Win. I was able to launch my 10th iOS application into the app store. It’s a universal app meaning that is runs on iPad and iPhones / iPod Touches. NewLeaf Labs knows iOS app development!

2012 was a good time in the gym. At my peak during my bulking cycle I was 225lbs, I trimmed down to 190lbs and got to about 13% body fat. I can see a difference in the way my body responds to physical activity. It loves it! Having a baby in march, Jackson Highland, it was difficult to get to the gym as often as I would have liked. Having my lifting partner, @JustinGiese, switch to a graveyard shift schedule didn’t help either. All in all, its a marathon, not a sprint. Bodybuilding is a lifestyle not an activity. I have big plans for 2013. I’m going to hit it hard early on, bulking, then lean out for summer. I’m looking forward to it. #getBig #win

I can give myself a #win on this. I moved my physical servers out of a co-located space, into a vitrualized environment on the cloud. So instead of just moving the apps and data to the cloud, I moved the servers! The future is here!

This is an #epicWin. One of my Shopify Apps is an SEO tool for managing meta and title tags. I did a lot of research on the subject of SEO. I also started writing an book on the subject. My book should be released in mid 2013. I need to make it happen.

I did this early in 2012. I used the app to help promote the presence of my Straight Edge Clothing company, Wolves Clothing (XWolvesClothingX). It was a web based app. It was actually much easier to make then I thought it was going to be. However, I was doing some things that fell into a gray area of their terms of service. Instead of having my account killed, I decided to disable the app. I do plan on re-working the app and using it again, for fun and profit!

This was a #fail on my part. I need to do a better of of this. This is one of my favorite business ideas that I have helped grow. Don’t get me wrong, the business is doing well, but I think it can really be pushed harder. Our designs are awesome and a great bargain for bands and clothing companies looking for high quality designs at reasonable rates.

This is a #win. I continued to contributing time and energy to We Still Believe, a non-profit group in Orange County aimed at helping the less fortunate. My Straight Edge Clothing Company, Wolves Clothing, was a sponsor at “Mosh-4-Food 2”, an annual canned food drive that was able to generate several tons of food for a local food bank. I also participated in a We Still Believe event at Disneyland for adults with special needs. Giving back is awesome and I want to do more of it.

Every year I posts a list of things I want to accomplish in that year. I have a feeling 2012 is going to be a big year for me. Here is a list of some of the goals that I have for myself:

I only managed to speak at 1 tech conference this year, OC WordCamp. I tried to get on the speaking list for BlogWorld Expo, but my topic, “Optimizing  the performance of WordPress” was too awesome for them, so it was rejected. Their Loss. I love public speaking, so I imagine this will continue to be one of my goals in the future. Since I only spoke once this year, I’m going to give myself a #FAIL

Well, I managed to spend a week in Kentucky camping with my friends. It was an amazing time. I had plans to visit @JasonXKeller in Prague, in the Czech Republic, but he moved back to America before I made my trip. At least I have my passport now, and I’m glad I get to hang out with him on the reg. #FAIL

I grouped these two goals together because they are very closely related. A bit of a back story in case you are new to following me… in January 2008 I destroyed my left knee and had to have major surgery.  The Doctor and physical therapist told me that the only way to get back to 100% strength was to hit the gym really hard for the next 2 years due to the massive damage and muscle atrophy that happened to my leg.

One thing I can say is that 2011 has been the year of #getBig. I hit the gym 2 hours a day, 5 days a week. I’ve also gotten really into sport nutrition and bodybuilding. My brother is my lifting partner and we push each other. Having a vegan diet has made weight lifting an extra challenge, but I love it. My leg still has a ways to go, but I have been able to stack on an insane amount  of muscle. I’m finally starting to develop a body builder physique. 17 inch arms… #EpicWIN

This is a simple answer, I was able to release 4 iPhone apps this year. That’s a #WIN

Nope, didn’t happen, but I’m ok with that. #noCareEver

This year I hooked up with a great group of guys from South Orange County called WSB (We Still Believe). I helped out a few times cooking and distributing food to the homeless. WSB also organized a few food drives and concerts that raised money for homeless shelters in the Inland Empire. It’s super rewarding and something I want to continue with. #WIN

This year, I was able to increase my automated income through iPhone app sales, Google Adsense, and Shopify referrals. It’s a far cry from being able to live off it, but its a start and its inspiring to see what I was able to accomplish. I’m giving myself the #WIN for this, but I’m going to be working on this moving forward.

I got two new tattoos this year, both from my buddy Marc Jackson at Tattoo Revolution in Redlands Ca. Bonus points for you if you understand why I got the first tattoo on St. Patrick’s day. If you don’t know, watch this video. Marc Jackson and I actually got matching “Leprechaun” tattoos. The second tattoos is my 5th Straight Edge tattoo, and reads “Cradle To The Grave”, and is based on lyrics from “Path of Resistance”. It was featured in a tattoo book, “With the light of Truth“. So yeah, an internet meme tattoo, and a straight edge tattoo, total #WIN 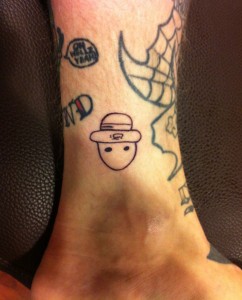 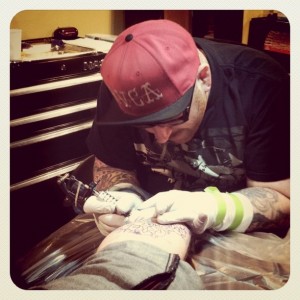 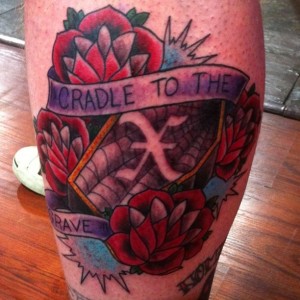 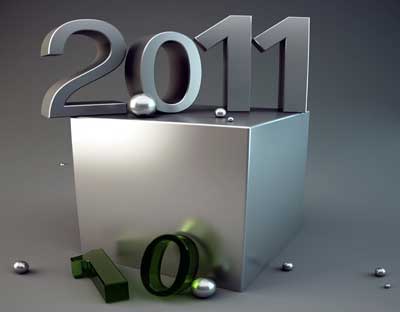 2011 is going to be a great year, I can feel it. Following up my last post, here are some of the things that I’m planning on accomplishing. 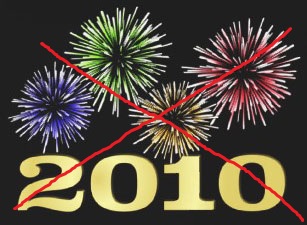 I started 2010 off with a list of things I wanted to accomplish. Since the end of the year is just hours away, I figure it would be fun to revisit the goals I had set out for myself.

In 2010, I launched 3 new iPhone apps, and I have one pending approval, for a total of 4 apps in 2010. I also started a consulting company, NewLeaf Labs, that specializes in iPhone app development. In January 2010 taught an iOS development at a college in San Bernardino California. I guess you can say that 2010 was packed full of iPhone, and I met my goal.

On January 28 2010, I destroyed my ACL in my left knee and had to have major knee surgery. Of course I blogged about it. Recover from the surgery has been a longer road then expected. It’s been 11 months since my injury. I’ve been going to physical therapy 3 days a week and lifting weights when I can. I still have a long way to go to be 100% again, but I can honestly say that having my mobility taken away has made me appreciate my body, and fitness even more. 2011 will be my year of body building.

For the most part I would say that I reached this goal. At home I use my Mac Book Pro 95% of the time. My PC is mostly for media sharing via my XBox. I love the stability of the Mac.

Yeah, this one is a big #FAIL. Not being able to drive a car or stand for 6 months really put a damper on this one. Maybe 2011 will be more fruitful in this are.

I’m a huge fan of The 4-hour Work Week, but I’ve back slid on this one. I sold the pomade company I had and took 2010 off. I already have plans for 2011, and I have people in the US, India and China working with me to get the new project off the ground. More details to come… 🙂

This is an on going battle. I will say that my office is the leanest it has ever been and I can park 2 cars in my garage. I’ll count this as a win, but i still have so much more to organize / throw out.

This one gets a big win. I was unable to walk for 6 months this year, but I still managed to make it to 3 conferences, WordCamp LA, CFUnited, and BlogWorld Expo. I was a speaker at WordCamp, and CFUnited. I hope to speak at more conferences in 2011, including Blog World Expo.

I thing this goal can be checked off the list as well. Again, for not being able to walk for 6 months, I was able to spend 2 weeks in Portland, a canoe trip in Minnesota, a 5 days in LasVegas, and a week in the Washington DC area.

2010 was the year of the Bluetooth. Bluetooth mouse, and Bluetooth Headphone. Check.

Well, being injured technically isn’t sick, but I’m going to fail myself on this one. Not being able to walk for 6 months doesn’t exactly fall into the “healthy living” section of life.

Massive medical bills from surgery, doctors appointments and physical therapy have made it tough to do. I’m hoping that 2011 will really be the year that I can declare that I am debt free. It’s a good goal for all of us to have.